On Thursday December 8th 2022 at Faces Brewing Co, Parlour Bells is excited to take part in Anngelle Wood’s 11th Annual Spectacular Gift Drive to benefit the DCF Wonderfund. The Wonderfund is a private nonprofit, 501(c)3 serving kids engaged with the Massachusetts Department of Children and Families. The organization provides comfort and dignity to 53,000 children who have been impacted by abuse and neglect.

We’re asking attendees of the event to consider bringing an unwrapped gift to the show. Gifts can include toys, clothing, art supplies, personal care items, books, electronics, sporting goods, hoodies, gift cards, and things kids of any age would like to get for the holidays!

This is going to be an incredible holiday party featuring some fantastic local rock music, including Parlour Bells, Gretchen Shae & The Middle Eight and Little Fuss!

After nearly two years, Parlour Bells performs live for the first time as part of the Malden Music Series on August 7, 2021. The event is outdoors and FREE to the public. 1-6PM, 88 Pleasant Street, Malden. Sponsored by the excellent SUM Studios.

Parlour Bells became a thing in 2010. So celebrating our first decade making music was a BIT unusual this year to say the least. That being said, we actually managed to get away with quite a bit. So, as we hobble into 2021 with everyone else, we are excited to debut not only this new single but our new member, Allison Sigrist. With Allison we share a love of Freddie and Bowie and above all KEYBOARDS. Listen to what we’ve accomplished, musically together, though still quite far apart! This is SUPERCOMPUTER.

The second dispatch from our quarantine-be-damned collection of new original recordings Survival of the Patient: The Antibody Sessions is available now. 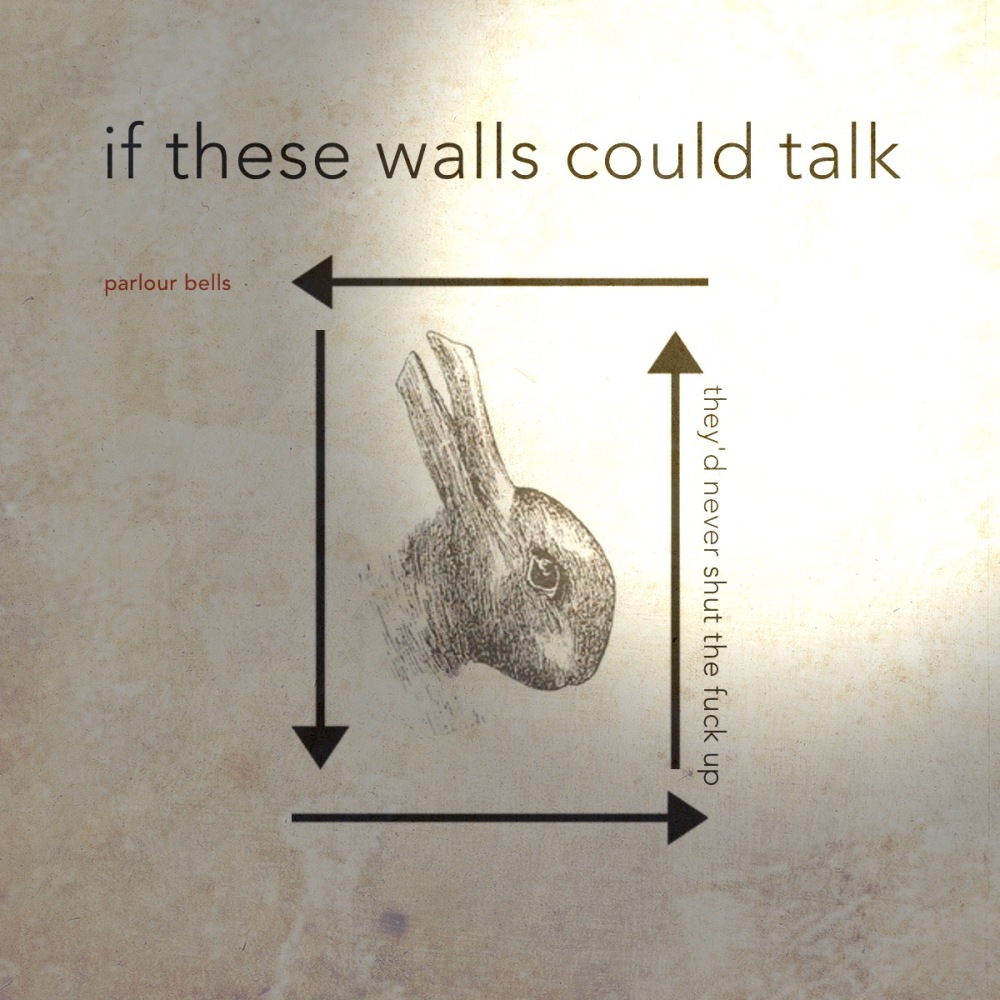 Anngelle and Glenn discuss how they are both adapting to making and showcasing music during the pandemic. Lots of ideas for what might be next for the new normal in music.

Like everyone else, Parlour Bells has reassessed what would be possible in the months to come. The rough plan we had was to enter the studio and record our next release, To Be Or Not To Behave.

Making a new record for us always involves a number of engineers, creatives and vendors. A lot of hardworking people.

That being said, Parlour Bells might be uniquely suited for this scrappy moment. I may author the songs, but they are mere sketches until I share with my visionary bandmates who, with their immense talent, bring my silly ideas to life.

In the early days of this thing, I was encouraged watching how fast my wife and so many others quickly adapted their skills and expertise to new formats. It’s rare to see a generation mobilize and acclimate like we have now. It’s inspiring. Parlour Bells is adapting as well.

Survival of the Patient: The Antibody Sessions from Parlour Bells will be a developing compilation of sketches aspiring to become something more. It will be Parlour Bells working remotely and away from each other. Our first smoke signal from the isolation camp is called The Ballad of Felix Moncla. Something that feels appropriately lonely and alien.

I hope Parlour Bells can help you kill some time. Kill some time with us. And wash those hands…we’ll all be putting them together again someday soon.

The “Tape” is Real. The first music video from Parlour Bells in 5 years, “Sanctuary Cities,” has arrived!

The first full length album from Parlour Bells, Waylaid in the Melée, is now available for download and streaming on Bandcamp, Spotify, Apple Music and more!

On Sunday, August 2, 2015, Parlour Bells enjoyed the distinct honor of performing as the supporting act for a newly reformed Culture Club featuring all four of its original core members (Boy George, Mikey Craig, Jon Moss, Roy Hay) at Boston’s Blue Hills Bank Pavilion in the City’s thriving Seaport district. In a strange coincidence, Parlour Bells singer and principal songwriter Goddamn Glenn learned about the booking via group text message as he was making his way to the Pavilion to catch The Smashing Pumpkins / Marilyn Manson concert 5 days before the Culture Club show would take place. The 2014 Boston Music Awards nominee for Live Artist of the Year, Parlour Bells leapt at the opportunity to open for the iconic, New Romantic legends most famously known for their hits “Karma Chameleon,” “Do You Really Want to Hurt Me,” “Time (Clock of the Heart)” and “I’ll Tumble 4 Ya.” 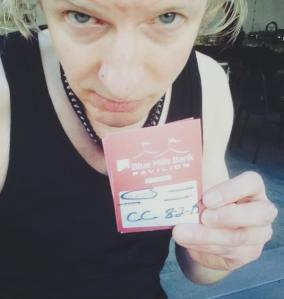 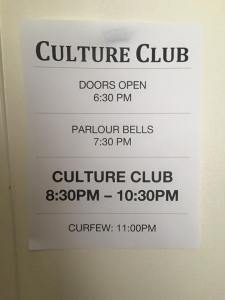 The band welcomed its cadre of faithful photographers to the event and helped secure them access to the Pavilion’s photo pit as a token of thanks for all their coverage over the years. Below are some of the photos from Coleman Rogers, Mike Oliver and Adam P. Salsman. 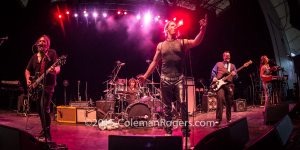 Parlour Bells delivered a 45 minute set to the gracious and receptive Blue Hills Bank Pavilion crowd. Press from both The Boston Herald and The Boston Globe were in attendance and said of the band’s opening set:

Parlour Bells…a great pick to open for Culture Club and I recommend Live Nation consider the glam demi-gods provide support for any Bowie, Morrissey or Jane’s Addiction shows that come along. — Jed Gottlieb, The Boston Herald

Boston’s own Parlour Bells treated the crowd to a short but lean opening set of theatrical glam rock. Taking a picture of the audience, frontman Goddamn Glenn instructed everyone to say the evening’s unofficial motto: “I’ll tumble for ya.” — James Reed, The Boston Globe 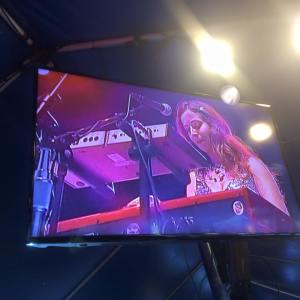 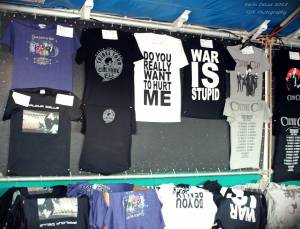 After the performance, Parlour Bells greeted their new fans near the merch area, where they also said hello to Boston DJ and local rock supporter Anngelle Wood, who took in Parlour Bells’ set before jetting off to her shift at 100.7 WZLX where she then kicked off her Boston Emissions program with a block of 4 Parlour Bells songs in celebration of the evening. 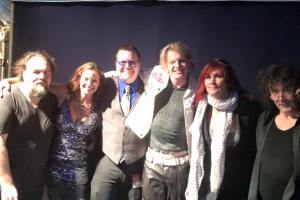 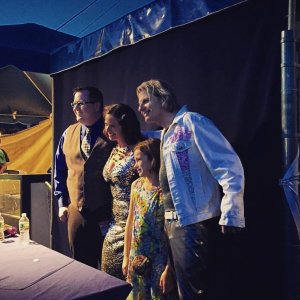 Afterwards, the band took in Culture Club’s fantastic set stageside, and then spent some moments chatting after the show. Backstage, Elvira “Mistress of the Dark” even made a surprise appearance. 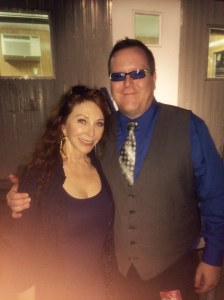 During one memorable exchange, Parlour Bells gave legendary frontman Boy George the task of choosing the Culture Club song the band should cover in the future. His response underscored his authenticity and integrity as a songwriter as he suggested that the band cover a lesser known (albeit clearly cherished) song called “Love Is Love” from the 1984 pre-Internet singularity computer/human romance sleeper Electric Dreams. George relayed that while it was a favorite, the song hadn’t received a great deal of attention or airplay over the years. Glenn made a point to queue the song up upon returning home and instantly understood how perfect it was for the band to cover.

Culture Club are set to release their first album of original music in over 15 years with the forthcoming Tribes. Click here to listen to the album’s first single More Than Silence.

Parlour Bells would like to thank Culture Club, their crew, the staff of Blue Hills Bank Pavilion and Live Nation for being tremendously accommodating and helpful to the band, for this historic opportunity, and for a night we will never forget.

Boston’s own glittery rock powerhouse Parlour Bells will perform on Sunday 8/2/15 at Blue Hills Bank Pavilion in support of legendary English 80s pop ensemble Culture Club. Perhaps one of the most representative bands of the 1980s, Culture Club, fronted by iconic singer Boy George, gave us international hits such as “Do You Really Want to Hurt Me”, “Time (Clock of the Heart)”, “I’ll Tumble 4 Ya”, “Church of the Poison Mind”, “Karma Chameleon” and “Miss Me Blind.”

Parlour Bells recently returned from a fantastic showing at The Outlaw Roadshow in Nashville, and then helped its hometown bid farewell to Boston’s beloved TT the Bear’s the Place on 7/22/15. Fronted by the eye-shadowy and theatrical Goddamn Glenn, Parlour Bells delivers the blistering, soulful guitar virtuosity of Boston’s great Nathaniel Leavitt, infectious basslines of Brendan Boogie, the shimmering synth, grace and power of Magen Tracy, and the visceral thunder of Paul Myers on drums. This impeccably dressed, stylish band was named one of Boston’s Ten Top live acts by The Improper Bostonian, has been cited as one of Boston’s best by CBS, and has scored two Boston Music Awards nominations. In 2013 their video for barroom anthem “Bachelor Hours” earned a Video of the Year Nomination. And in 2014, Parlour Bells was nominated Live Artist of the Year.

Since forming in 2010, Parlour Bells has seduced its audience with boozy, sexy anthems like Pet Names, Speak Up, O Holiday and You Don’t Wear That Dress, The Dress Wears You (featuring Morphine’s Dana Colley on sax). They caught the attention of guitarist Dave Navarro with their acoustic cover of Jane’s Addiction’s “Classic Girl.” Recently, the band has been teasing out singles like “Wetware” and “Celebrities On Ice,” science fiction rockers which will culminate in the band’s first ever full length release, expected in 2016.

On a personal note, Parlour Bells singer Goddamn Glenn considers Culture Club to be one of his earliest glam pop rock influences. He considers the exoticism and avante garde persona of Boy George to be fundamental to that of his own. 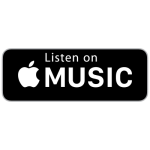